Life is an amazing and interesting journey insofar as the way in which new friendships start.  A few years ago I was involved in organising a Christmas festival in Newcastle West when I received a tweet from a “Roisin Meaney” offering to help out by doing some children’s storytelling sessions.  I’m not one to look a gift horse in the mouth and gladly accepted.  However, Roisin’s offer turned out to be a lot more than storytelling and a friendship was formed.  When I first read the tweet, the name seemed familiar but little did I know Roisin Meaney is an award winning best selling author of chick lit.  She told Sinead Desmond in a TV3 Ireland AM interview that she doesn’t mind it being called that as long as people read it.  And sure why should she object to being categorised in that group?  Isn’t it full of wonderful authors like Maeve Binchy, Cathy Kelly, Marian Keyes, Patrician Scanlan and many more.  I love their writing and I love Roisin’s.  I’ve read many of her babies as she likes to call them, including her eleventh and latest one, Two Fridays in April.

“It’s Friday, April 2. Daphne Darling knows that she should be celebrating her stepdaughter, Una’s 17th birthday, but it’s hard, because the date also marks the one-year anniversary of her husband Finn’s death. Daphne can’t turn to her own mother, Isobel, for advice – ever since Isobel ran out on Daphne and Dad Jack for a new life, they have never been close. Finn’s elderly mother Mo is still grief-stricken at the death of her only son, so she is of little help. But by the end of that day in April, things will have changed for all of them. Una, it would seem, has disappeared…

She’s told them all that she is eating at a friend’s house, but instead, she’s at a mystery wedding – with the last people on earth she might be expected to have befriended. And what’s more, Una has decided to track down her ‘real’ Dad, with the help of a stranger… Una’s bravery, her foolishness, forces Daphne, Isobel and Mo out of their shells and for the first time since Finn’s death, each woman has to confront herself, her grief, and to work out what really matters in life. And when the next Friday in April rolls around, it marks a fresh start for each of them… a new beginning.”

Roisin deals with lots of different themes in the book from grief to assault to “random acts of kindness”.  Roisin’s offer to Winterfest and her subsequent inadvertent offer of friendship to me could be considered “RAKs”.  This is something that she is an advocate for and talks about in detail in her Ireland AM interview.  However, when she tweeted me in 2012, I suspect it was a totally unconscious RAK but one I am very grateful for. 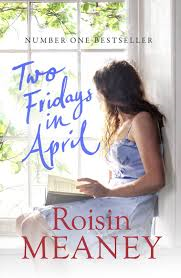 If you know someone who likes chick lit, why not do a RAK and check Two Fridays in April out of the library for them, lend them your copy or even better buy them their personal copy to enjoy?  It is a wonderful, inspiring and uplifting read from an incredible Irish author and is number 7 and climbing on the Irish Best Seller list at the time of writing.  (Be sure to check out page 341 to read my first ever/probably last acknowledgment in a book!)

Congratulations on the latest addition to your family my dear friend Roisin.  I look forward to number 12 and your triplets being completed later this year!

2 thoughts on “A Meaney Full Friendship”

This site uses Akismet to reduce spam. Learn how your comment data is processed.

Listen to #BPT Podcast on Soundcloud